Initial Public Offering or IPO is when the company offers shares of stocks to the public for the first time.

While planning for an IPO the company has to select an underwriter or underwriters and an exchange where the shares issued will be publically traded.

Advantages of an IPO 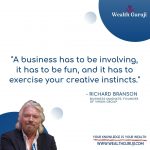